In 1874 St. Pius V was founded as a territorial parish by the Jesuits at Holy Family Parish on Roosevelt Road. The original church was built at 18th Place and Paulina, next to St. Veronica’s school, founded in 1872 by the Sisters of Charity of the Blessed Virgin Mary. In 1884, construction of a new church began at 19th Street and Ashland. Starting in 1885 services were held in the basement hall until the upper church was finished in 1893, in time for Chicago’s first World’s Fair and Columbian Exposition. Note: St. Pius V is the only Catholic church in the U.S. whose main stained glass window depicts Christopher Columbus. In 1882, diocesan clergy took charge of the parish until 1925 when the Dominicans received it. By 1920, many Irish families had moved out and the parish became predominantly Polish. After the stock market crash of 1929, the Dominicans founded the National Shrine of St. Jude Thaddeus, which grew rapidly, attracting thousands for special devotions to the “patron of hopeless cases” from around the world. In 1939, an addition was built to expand the Shrine. Hispanics began pouring into Pilsen in the 1950s. St. Pius V became the first parish in the neighborhood to offer Mass in Spanish in August 1963, but the adaptation was not easy. 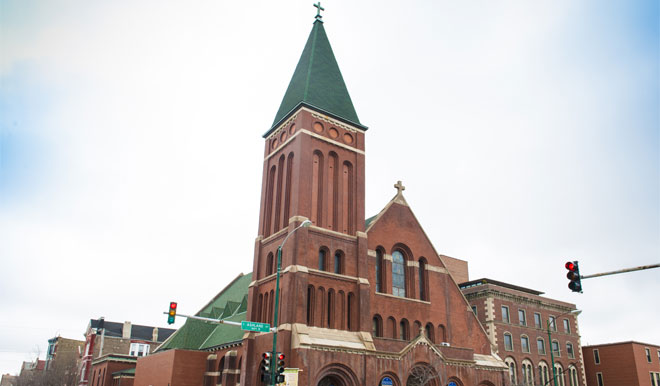