Chicago’s dining scene is always evolving, with trending new spots opening their doors seemingly everyday. Looking for a guide to some of the hottest dining experiences in town? Here’s our ever-growing list of Chicago’s most buzzed-about restaurants, from the world’s only Michelin-starred brewery to one of the best new restaurants in America.

Looking for the classics? Check out guide to essential Chicago restaurants.

Rose Mary
After winning Top Chef and leading the kitchen at acclaimed Spiaggia, Joe Flamm has set off on his own with Rose Mary. Named for his grandmothers, the Croatian-Italian restaurant in the hot Fulton Market district showcases Flamm’s award-winning pasta dishes alongside cuisine inspired by his wife’s Baltic heritage. Don’t miss the squid ink risotto or the classic cevapi, grilled sausages that’s are a popular Croatian street food.

Jaleo
International chef and humanitarian José Andrés brings his authentic Spanish cuisine to Chicago with Jaleo. The menu at the long-awaited River North spot showcases the country’s regional diversity, from delicate slices of famous jamon ibérico to traditional tapas like a potato salad with Spanish conserved tuna. And don’t miss the paella, a classic dish made in Andrés’ unique style.

Apolonia
Building off the success of S.K.Y. in Pilsen, chef Stephen Gillanders has opened his new venture Apolonia in the South Loop neighborhood. The bright and airy space is the perfect backdrop for dishes like roasted mussel toast, local burrata, and scallop tagliatelle with shellfish butter. The black truffle puff bread is dying to be Instagrammed — and it tastes as good as it looks.

Andros Taverna
One of the buzziest new spots in an already-buzzing neighborhood, Andros Taverna recently opened its doors in Logan Square. The spot is already earning rave reviews for their modern take on Greek fare, from the tender grilled octopus to the addictive mezze. The beverage program dives deeper into Greek culture, with a curated selection of Mediterranean wines.

Esme
This hotly anticipated tasting-menu concept Esmé has finally opened in the Lincoln Park neighborhood. Though the food is high-end (the chef is an alum of Michelin-starred Next restaurant), the atmosphere is meant to be comfortable and welcoming. Dishes find inspiration from local artists, like a salt baked fish dish that’s carefully presented to complement the handmade platters a local artisan designed for the restaurant.

Ooh Wee It Is
Find soul food with a twist (like pot roast cupcakes and signature sweet tea made with local raw honey) at Ooh Wee It Is in the Chatham neighborhood. The family-run restaurant also offers an extensive cereal bar and fun events like Soulful Sundays with live music. The spot is so popular that they’re planning to expand to the Wicker Park neighborhood.

Moody Tongue
Moody Tongue has long been a Chicago fixture, and their new South Loop brewery has put them in a league of their own. The refined space includes both an elevated restaurant and a more laid back tap room. Head to The Bar to sample their regular beer lineup alongside limited releases, like their renowned Farmers Market beers, or make a reservation at The Dining Room for an upscale tasting menu experience.

Dear Margaret
An ode to French-Canadian cuisine with a Midwestern ethos, Dear Margaret has been turning heads since it opened. Nestled in the Lakeview neighborhood, the restaurant’s menu is focused on local and seasonal ingredients — it might include indulgent foie gras torchon, classic steak frites with shallot butter, or chocolate-y layered nanaimo bars (a Canadian favorite).

Lardon
Charcuterie, anyone? Lardon, a meat-and-cheese focused shop, just opened in Logan Square and was designed to emulate old-world butcher shops from around the globe. The artisanal charcuterie and salumi are all made on site and the carefully curated cheese selection is unmatched. Along with classic boards, they also offer a full menu of salads and sandwiches, plus wine, beer, and cocktails.

Tzuco
Famed chef Carlos Gaytán returns to Chicago with Tzuco, an homage to his Mexican culinary background and his love for French Cuisine. The River North space is meant to evoke the cozy sensation of being home, while the menu blends Mexican and French flavors. The location also features a bakery, Panango, and a 16-seat tasting menu space, Tales of Carlos Gaytán.

CEBU
Get a taste of the Philippines in Chicago at CEBU. The Wicker Park restaurant serves regional Filipino fare with a modern touch for brunch, dinner, and happy hour. Try classic dishes like lumpia, Filipino egg rolls stuffed with pork and veggies, or the show-stopping family style dishes like the stuffed pork belly roasted for three hours.

Avli River North
The team behind the acclaimed Avli Taverna in Chicago’s Lincoln Park neighborhood has opened their newest spot, Avli River North. The menu features contemporary cuisine with dishes rooted in Greek tradition, like honey and fig saganaki and the family-style Greek feast with a whole leg of lamb. Avli River North features two floors of open and airy dining space, plus an outdoor patio in warmer months.

Virtue
This Hyde Park gem has been a local favorite from the minute it opened. Virtue serves modern takes on classic Southern dishes, earning a visit from former President Obama and a spot as one of Eater’s best new restaurants in America. Expect a funky chic space, welcoming vibe, and outstanding food.

Galit
When a James Beard Award-winning chef sets up shop in town, people are bound to pay attention. Zach Engel’s (winner of the Rising Chef award) modern Israeli concept blends influences from Engel’s Jewish-American heritage, along with Cuban and Palestinian flavors. Go a la carte, or opt for the family-style tasting menu so you can try a bit of everything.

Jeong
Jeong has made the rare, stunning rise from mall food court to one of the most acclaimed new restaurants of the year. It’s been lauded by locals and critics alike, and recently earned a nomination for Bon Appetit‘s list of best new restaurant of 2019. Try the creative, strikingly composed Korean dishes a la carte or via the chef’s tasting menu.

Cafe Bonhomme
Cafe Bonhomme is one of the most buzzed-about spots on the Chicago River. The richly decorated bar and restaurant dishes out sharable Mediterranean cuisine in a former 100-year-old jewelry store — complete with the original, massive crystal chandeliers. Or head outside to the riverfront patio and grab a seat at sister restaurant and boho paradise Beatnik on the River. 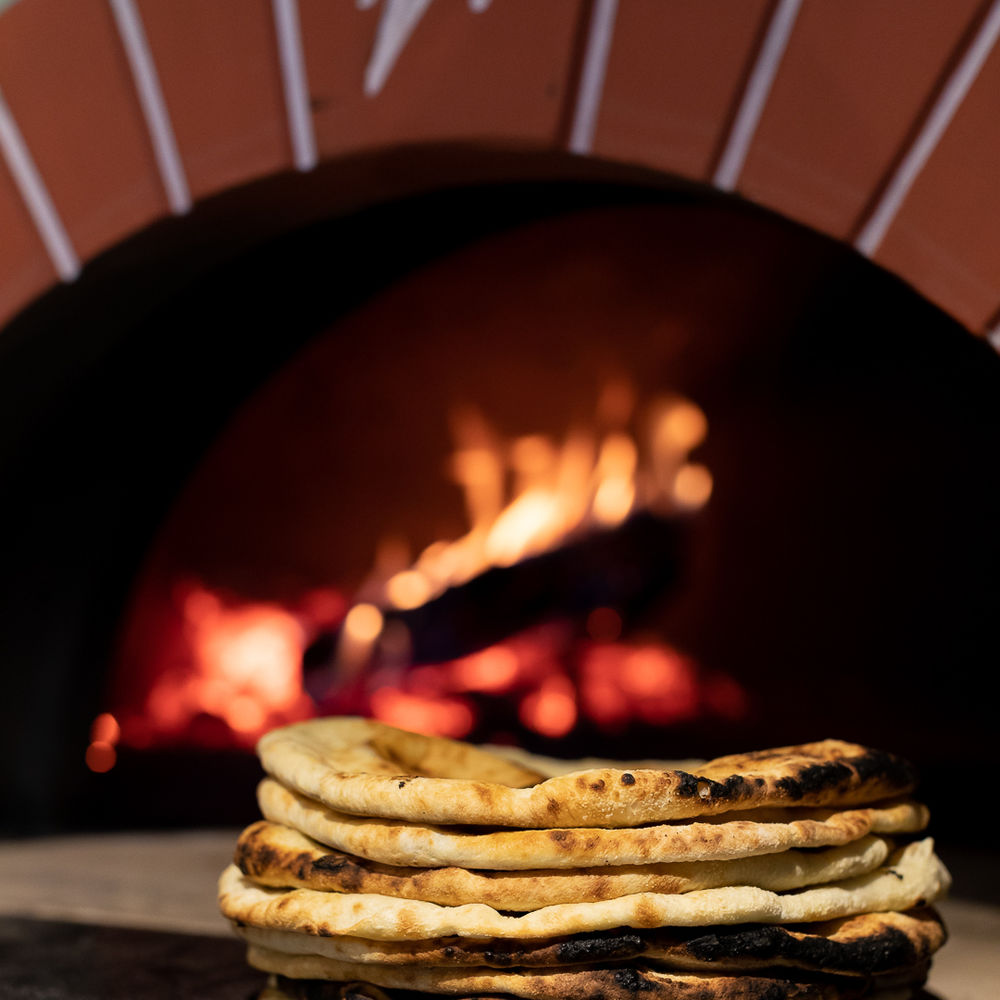 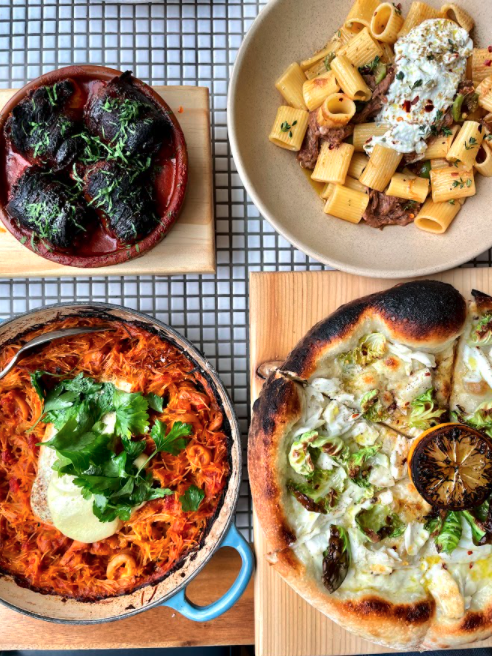 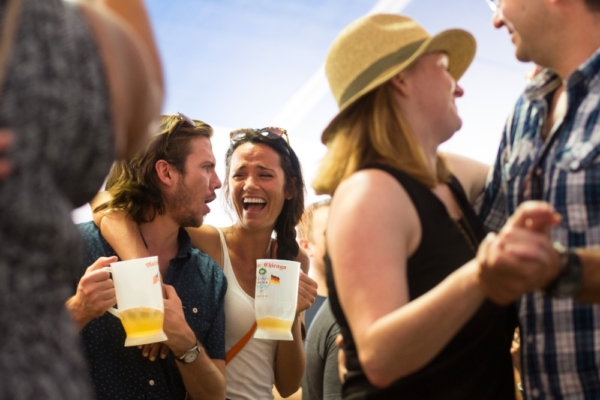 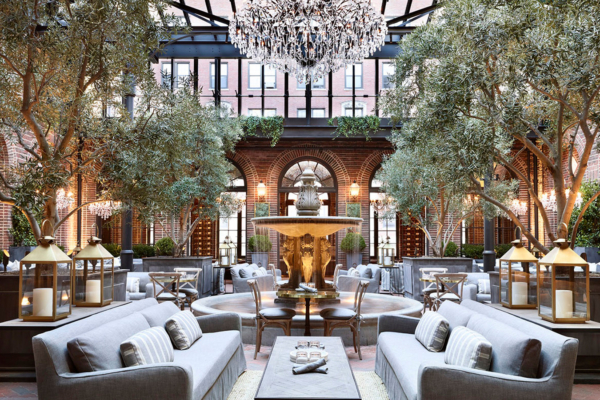