The total number of visitors to Chicago in 2016 reached 54.1 million — a new record for the city, thanks in part to its robust meetings and conventions business.

2017 PREVIEW: 10 MOST ANTICIPATED CHICAGO VENUES FOR MEETINGS AND EVENTS

An exciting crop of new and renovated meeting and event spaces are popping up all over Chicago this year, designed with both large and small groups in mind. Revel Motor Row opening around the corner from McCormick Place, the 3-story Larkin Hall from Blue Plate Catering, and a West Loop location of Punch Bowl Social top the list.

HOTEL BURNHAM HAS A NEW OWNER AND A NEW NAME 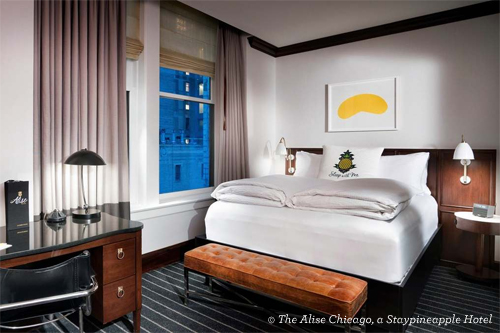 At the end of 2016 the historic Hotel Burnham in the Loop was sold and renamed The Alise Chicago by its new owners, Pineapple Hospitality. Guests may now enjoy newly upgraded and signature amenities found only at STAYPINEAPPPLE hotels including The Naked ExperienceTM, Dash's dog-friendly accommodations, and daily pineapple cupcake service. The newest of eight properties owned and managed by Pacific Northwest-based Pineapple Hospitality, The Alise Chicago is the first of the company's hotels to open in the Midwest.

Catering to both leisure and business travelers alike, The Alise Chicago offers 440 square feet of meeting space that overlooks Atwood restaurant. Perfect for intimate gatherings, small rehearsal dinners and corporate functions accommodating up to 30 seated guests, The Burnham Room is located on the mezzanine level of The Alise Chicago overlooking Atwood and Washington Street. 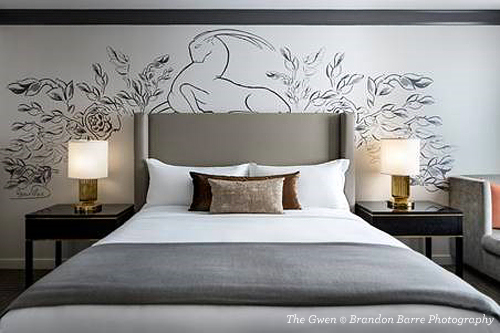 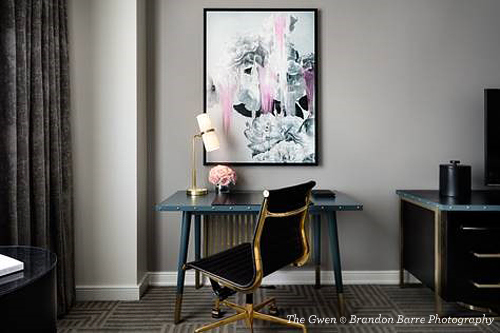 The Gwen on Chicago’s Magnificent Mile is sprucing up its Art Deco-style guest rooms with jewel-toned accents and luxurious upholstery, with an expected completion date in April. With inspiration drawn from the hotel's namesake, famed sculptress Gwen Lux, The Gwen's new guest rooms are rooted in an approachable elegance. Conceptualized and designed by award-winning Simeone Deary Design Group, each of the hotel's 311 rooms and suites will boast the newly-debuted layout, designs and Art Deco, 1930s-inspired aesthetic.

The newest member of Starwood Hotels and Resorts' prestigious group The Luxury Collection, The Gwen opened its doors in September 2015 (taking over the original Conrad Chicago hotel) and debuted its newly remodeled lobby, rooftop terrace, lounge, and restaurant in May 2016.

Learn more about The Gwen.

TIME OUT CHICAGO PICKS THE BEST NEW RESTAURANTS OF 2016 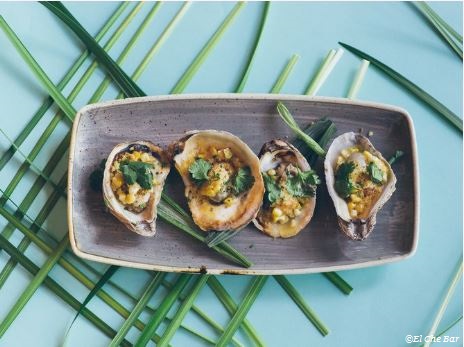 Time Out ranks the 14 best new restaurants that opened in Chicago last year, from fine dining to bountiful brunch spots.

THE 2016 LYFTIE AWARDS NAMES NAVY PIER AS TOP TOURIST DESTINATION IN THE U.S.

Chicago’s Navy Pier was named by Lyft as the top tourist drop-off destination in the country during 2016.

THREE DOTS AND A DASH NAMED MOST INSTAGRAMMED RESTAURANT IN ILLINOIS

The lavish tropical Tiki drinks at Three Dots and a Dash have inspired enough posts to win the title of Most Instagrammed Restaurant in Illinois.

Read more about the recognition.