In Chicago, every neighborhood is home to diverse communities representing cultures from around the globe. This month, we’re honoring Native American Heritage Month by featuring some of the individuals sharing and celebrating Indigenous culture in Chicago.

Meet a chef showcasing Indigenous recipes and ingredients, a curator of a new exhibit on Native voices, an artist taking a contemporary look at traditional methods, and more. These are tales you can only find in Chicago. 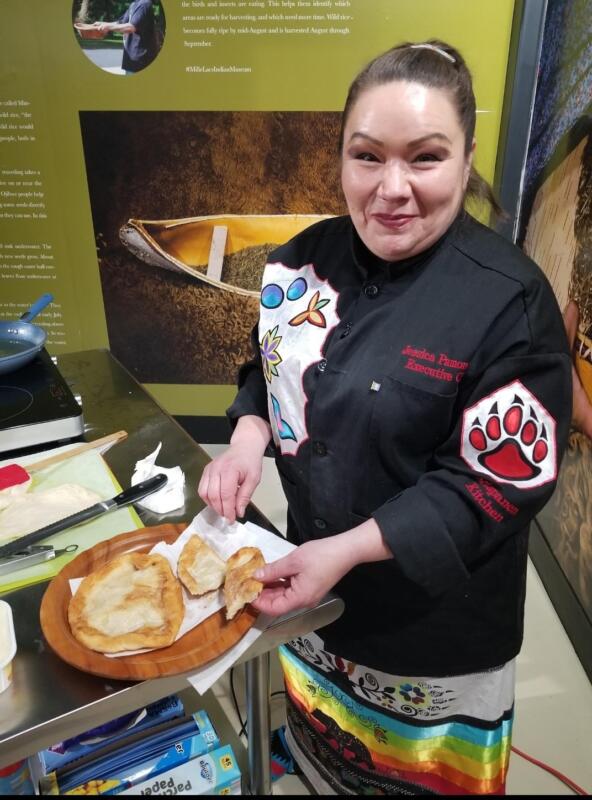 Jessica is the Chef and Owner of Ketapanen Kitchen, an Indigenous catering company based in Chicago. She is a citizen of the Menominee Indian Tribe of Wisconsin.

What are your early memories of food and cooking?
We grew up in Chicago’s American Indian community. When you grow up in a communal setting, food is a very big part of everything we do. So anytime we would get together for events or ceremonies, the first place I always went was to the kitchen to help out. So it’s always been instilled in me as far as I can remember, and I was just doing it, just feeding my family.

What inspired the name of your catering business?
I am an enrolled member of the Menominee Indian tribe of Wisconsin. And in our language, Ketapanen is an expression of love. Growing up, my mom always taught me that when you’re cooking, you cook with love because you’re not just nourishing bodies, you’re nourishing souls. So everything you do is with love.

What is the mission of Ketapanen Kitchen?
It’s a way to educate people about Indigenous foods and share my culture with others. And I think that got me more excited to start sourcing my ingredients through Native vendors and bringing not only education and awareness, but bringing these dishes back to our community.

I get to open doors for others to come behind me and leave their mark in the culinary industry. And it’s daunting at the same time. I’m here by myself. There’s a lot of pressure behind that, but I’ve done an amazing job so far. And I think I’ve opened some doors and I think I’ve created a visibility and I’m pretty proud of myself for that. 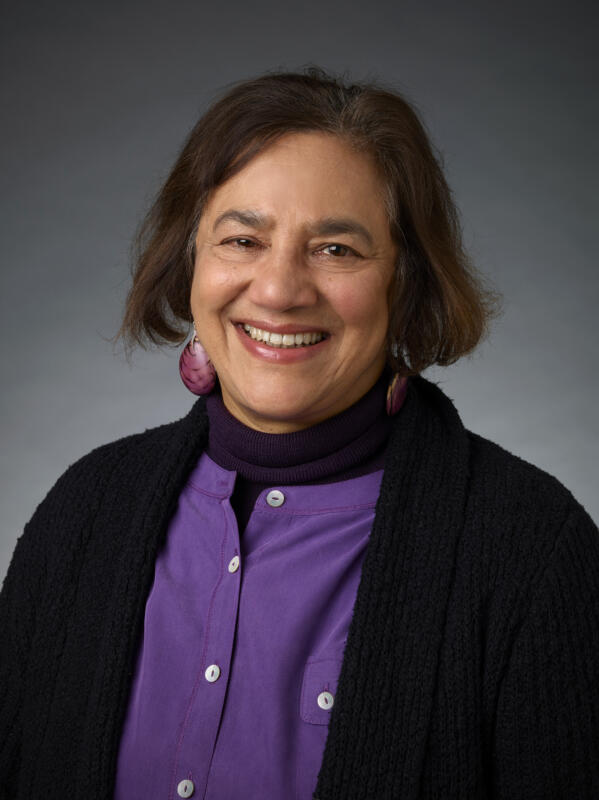 Alaka Wali, Ph.D., is the Curator Emeritus of North American Anthropology at the Field Museum.

Tell me about the impetus behind revamping the Field Museum’s Native American exhibit.
The exhibit had been up for over 50 years. It really represented an old-fashioned style of museum exhibitions, there was a lot of material in cases and not much explanation. It was really problematic on a number of fronts — the presentation and representation was very offensive to Native communities and stereotyped people as if they only existed in the past. So we really needed to make a change.

What was the approach you took to curating the new exhibit?
We reached out to over 150 storytellers and collaborators from across the country. The Field Museum has been embracing this approach of collaborative curation because we realize that if you’re going to talk about a group’s experiences or art, it’s really critical to have their voice at the table. They’re really the experts in many ways on what they want to say about their own lives and what these items mean and their significance.

What can museum guests expect from the new Native Truths: Our Voices, Our Stories exhibit?
It’s a completely different experience. It’s not about the objects anymore, it’s about the stories that people want to tell using our historical collection.

There’s a lot of contemporary art, contemporary tools, and everyday life material. The message that you get is that Native American cultures are alive, they’re thriving, they have a lot to teach us about the way we think about the land, our beliefs about ancestors. The main point is about the resilience and resistance of Native people, that’s a really important message that we want to convey. 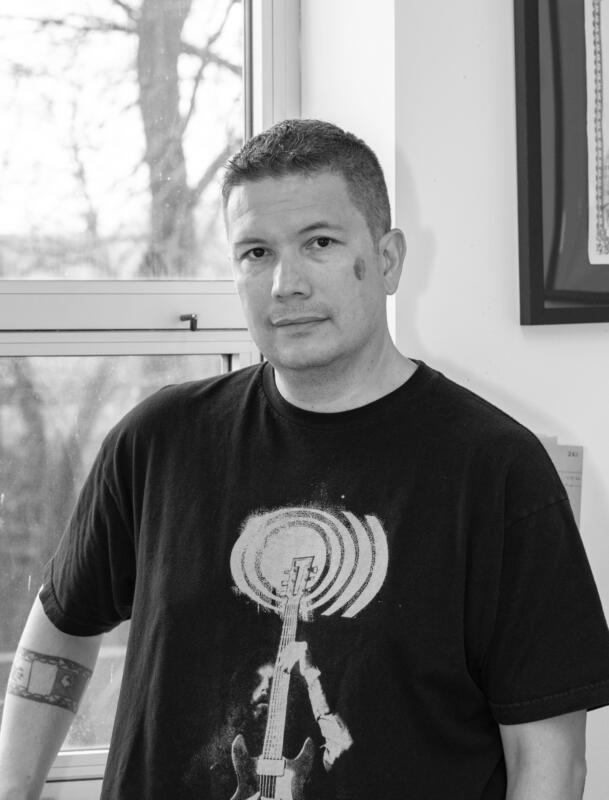 Chris is a nationally recognized artist and painter living in Chicago. He is of Osage, Kaw, Cheyenne River Sioux, and mixed European heritage.

A lot of your work is inspired by the Native American art tradition known as ledger art. Can you tell us about it?
The introduction of paper to the Plains tribes was through ledger books of merchants and soldiers. So the pictographic narrative art forms that were done on teepees or inside teepees or on clothing were then able to be done in a more detailed and easier way on paper through the ledger books and colored pencils and watercolor, that sort of thing. So that’s how it became known as ledger art, because that was the paper that was introduced.

It just kind of all came together for me, this is how I can continue my way of drawing in a contemporary style and be able to relate it to this Native American art tradition, and therefore continuing that tradition and bringing it forward into the present and on into the future.

What is your goal in creating these contemporary pieces?
Just to really affirm that we are in the here and now. Because so often we’re portrayed as in the past, as not being in touch with the present. But the exact opposite is true. It’s a daily struggle. But that’s what I want is for people to just understand that we’re just as contemporary as everybody else.

I hope that I can be inspiring to others, that they can do the same if they want, if they have that passion for art or whatever it is, that they too can be culture bearers and leaders.

What else have you been working on?
I’m helping create the Center for Native Futures, which will be opening downtown hopefully in spring next year.

It’s going to be a fine art gallery studio space to highlight contemporary Native artists and the idea of futurism through artwork, various forms of artwork, be it visual, art, poetry, music, films, whatever we can get our hands on to show people. 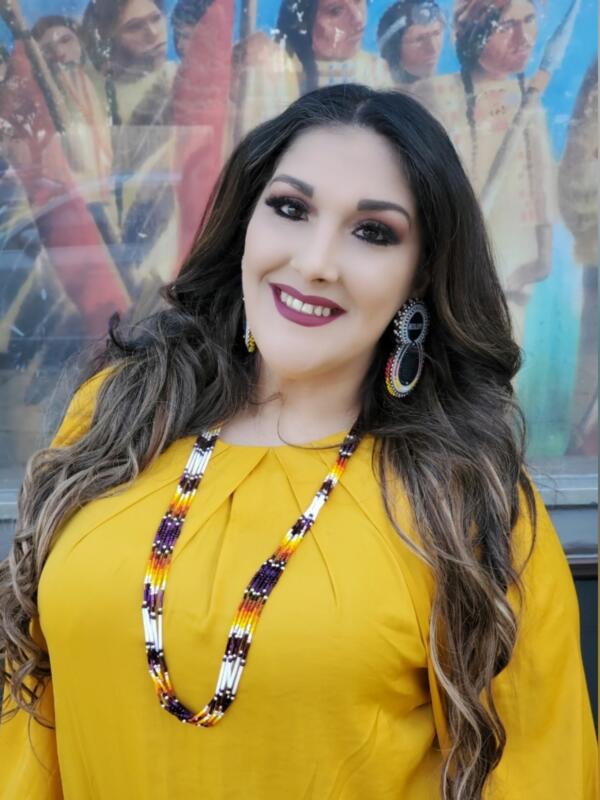 Melodi is the Executive Director of the American Indian Center in Chicago. She is from the Turtle Mountain Band of Chippewa Indians and the Oneida Nation.

What is the mission of the American Indian Center?
We offer 360 degrees of service. It’s not just traditional classes and cultural education. We do a lot of social, public, and political advocacy, we do everything from medication assistance, to after-school programs for our youth, to funeral services in our community. We do anything and everything we can to serve our Native folks.

The other part of what we do that makes us really special is that one of our missions is to foster those relationships between Natives and non-Natives, really to educate them on who we are. And the only way to do that is by sharing our culture with others.

What does your role as executive director mean to you?
My mom did this work for almost 20 years. Probably my earliest memories are when I was maybe five, like kindergarten-ish, just coming to after-school programs and going to powwows.

I genuinely love what I do. I love that I get to do my mom’s work. I wake up every day knowing that I am what my ancestors prayed for. I am what they wanted for our people. And I pass that on to my kids and all of our youth here. It just genuinely brings me joy even when it’s hard.

What do you wish more people knew about Native American people today?
We are still here. I think when I talk to folks and I tell people about the American Indian Center, I always have to give a little bit of Native 101. I feel like we’re the only population that has to do that. And it’s kind of unfortunate, but it’s also kind of a blessing at the same time. Because it allows us to share why we’re here, how we got here, how resilient we are, and what we continue to do. 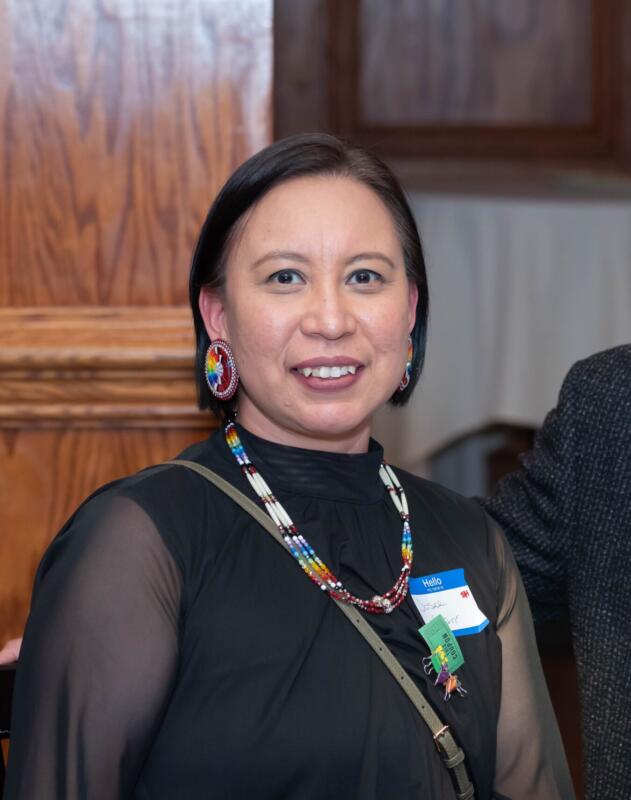 Josee is the Director of Operations at the Mitchell Museum of the American Indian in Evanston. She is an enrolled member of the Mandan, Hidatsa, and Arikara Nation (Three Affiliated Tribes) of North Dakota and also represents the Omaha Nation of Nebraska and Wiikwemkoong First Nation from Ontario, Canada.

How did you get started with the Mitchell Museum?
My family actually has been coming to the museum longer than I was working here. We make traditional dance regalia and cultural items, and I remember coming here to different artist markets.

I thought it was the coolest thing coming in here and seeing the community. That’s part of the Native culture. Everything is community-based. Everything we do is family and welcoming and open.

How do you describe the mission of what you’re doing at the museum?
It’s all about education, cultural education — teaching about who we are, and that we are still here today.

Everything about Native people is always in the past. Nobody talks about contemporary times today, things that’s going on within the community. And there’s still a large number of people here in the Chicagoland area that don’t know there’s Native people living here. They’re still finding out about our museum and we’ve been in this building since 1997.

If people aren’t familiar with the Mitchell Museum, what’s one thing you’d want them to know?
I just want them to come visit. Come see us over here, just to come in and look around and see what we got. Our volunteers, our staff, our docents here are wonderful, amazing people that just love to talk, and open conversations are how people learn.